This was our first stop after entering Yosemite National Park (May, 2012): 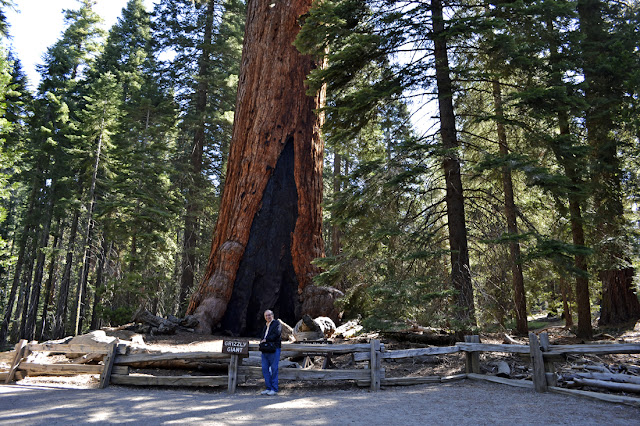 When we arrived in my Honda CR-V at the South Entrance to Yosemite National Park, northeast of Fresno, California, on Highway 41, a Park Ranger suggested we turn right after we entered the park and see the giant Sequoia trees in the Mariposa Grove forest. This was good advice because Yosemite Village, where we were headed to find our hotel, was a number of miles to the left.

These trees are something to see! I'm pictured above standing in front of "The Grizzly Giant." Estimated at 1,800 years old, this tree measures 96 ft. in diameter at the base. With the average frequency of forest fires being every 5-20 years, think of how many fires this tree survived! You can see the blackened vertical "fire scar" along the base of the tree.

Ol' Grissly here is as tall as a 19-story building and a Boeing 747 aircraft. It exceeds the height of the Statue of Liberty.

This is the first of dozens of spectacular scenes Yosemite offers: 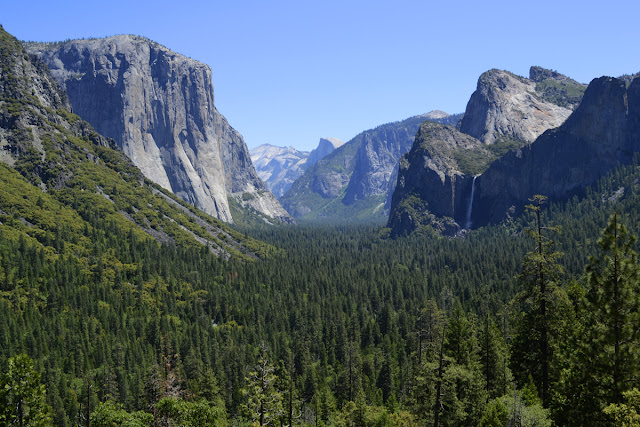 As you drive up California State Highway 41, about 100 miles northeast from Fresno, and after you enter Yosemite National Park, you go through an almost mile-long tunnel are treated to the view you see in the above photograph. For most of us it is the first of many breathtaking views of the Yosemite Valley.

As you look at the above picture, which I took during the morning of May 22 (2012), you'll see, on the far left, the most imposing of the rock formations in Yosemite: El Capitan. Half Dome is to the right of that, and then we see Bridalveil Falls and Cathedral Rocks.

A very helpful book for any photographer or snapshot-taking tourist to carry with you as you explore Yosemite, is PhotoSecrets: Yosemite by Andrew Hudson. I consulted this book often before, during and after my expedition to the park. I particularly valued his instructions on how to find, get to, and shoot the locations that Ansel Adams photographed decades ago. You can purchase an inexpensive but valuable tool in paperback from Amazon. 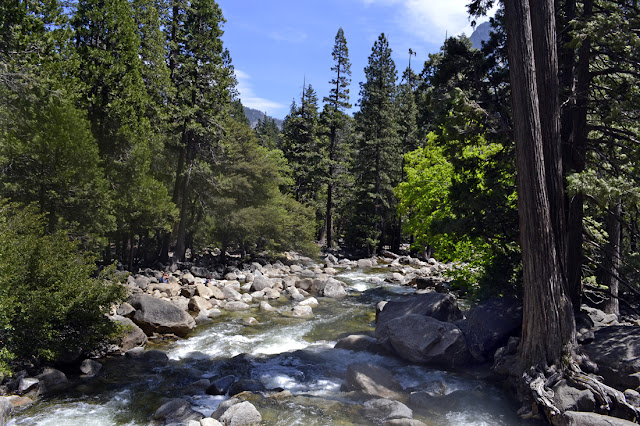 
After your eyes feast on some of the spectacular granite mountains, some towering about 3,000 feet above the floor of Yosemite Valley, you come across moving water and rocks, lots of both. This wondrous place is a land that was protected by the United States government before the first national park, Yellowstone, was dedicated and named. The clear, cool, clean water pours from the mountain waterfalls and travels many different routes through Yosemite. Each stream provides many opportunities for making photographs.

If I had to name a favorite image from my Yosemite visit, this would be the one: 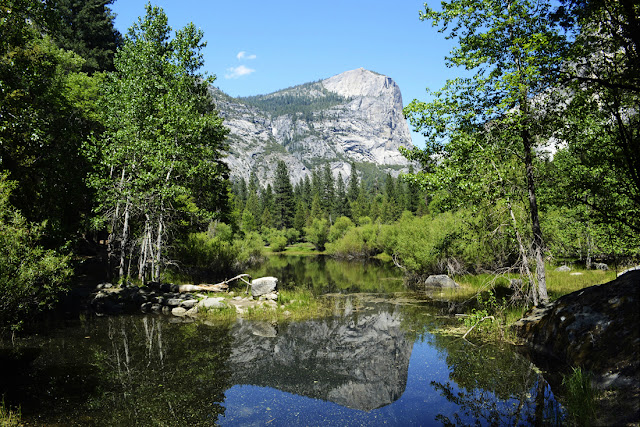 This scene represents one of Ansel Adams' most popular (aren't they all?) Yosemite images; his version was black and white. The Ansel Adams Publishing Rights Trust uses that image on the cover of a 112-page glossy paperback book of selected Yosemite photographs by the legendary photographer. The volume is simply entitled Yosemite - Ansel Adams and is available through the Amazon link below:

I captured several hundred images during our two-day stay in Yosemite in May. I'm still selecting various photographs for framing, notecards, prints, and, of course, this blog. Today, I had the Mirror Lake image printed in a 20 by 30 inch size with the goal of framing it. Walk a few paces and every time you stop or turn around, there's another beautiful picture just waiting to be taken in Yosemite.

A stop I just had to make: 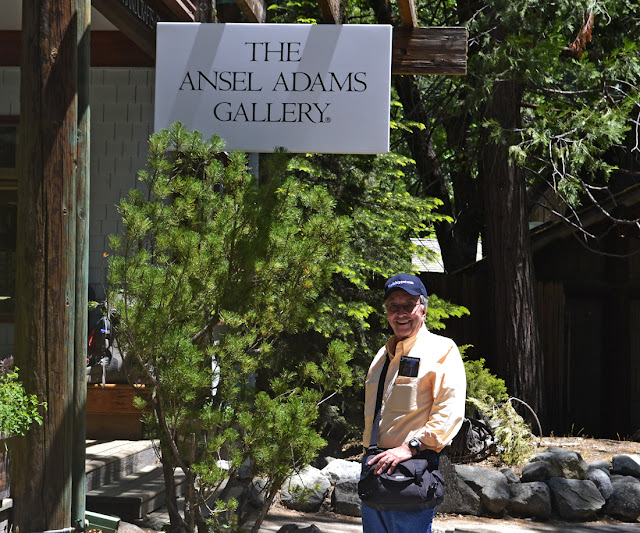 That's me in front of a store I've always wanted to visit and finally did in May of this year (2012): The Ansel Adams Gallery in the village area of Yosemite National Park, California. When the Canon AE-1 came out back in the late 70s or early 80s, I got into 35mm photography. I have long since made the move to digital but, back in those days, when I developed my own 35mm black and white film, it was Ansel Adams who introduced me to the art of photography and how one shouldn't just "snap" pictures but work to "make photographs." Adams is my photographic hero, teacher and source of creative inspiration and it was he that introduced me to other great photographers.

The Ansel Adams Gallery has been in business under the same Adams' family ownership since 1902. According to the gallery's website, which you can reach by clicking here, what started as a painter's studio is now a destination for photographers and aficionados (like me) of the legendary American photographer. Mathew Adams, grandson of Ansel Adams and president of the company, is part of the fourth generation to be running the business and is a specialist in the work of Ansel Adams.

Inside, I found "everything Ansel Adams." Prints made by the late master, note cards, all of Adams' books and other publications, calendars, the works. It's pure heaven for an Adams' fan; hence the big smile on my face.

Immediately after visiting the gallery and purchasing a book, JoAnne and I headed out with my Nikon D-3100 (in the bag in the above photo) and hopped on the Yosemite park shuttle to stop #17, where the 1.8 mile hike to Mirror Lake begins. Adams' image of the reflecting water and Mt. Watkins is on the cover of the book I purchased and I wanted to try shooting that scene myself. You'll find the result on this blog. Hard to miss creating a memorable photograph in the photographic wonderland called Yosemite!   ###