NO MAY, 2020, LUNCHEON. Although the Fryn' Pan is open for in-restaurant dining, in visiting with a number of our usual attendees and because of the elderly (aren't we all?) in our group of stalwarts, we decided it's not worth the risk this month. We'll take another look at it in June. Best wishes for continued good health during this crisis!  -  Larry Gauper  5-16-2020

Click on photos for larger images
Here's a photo of the April, 2017, attendees: 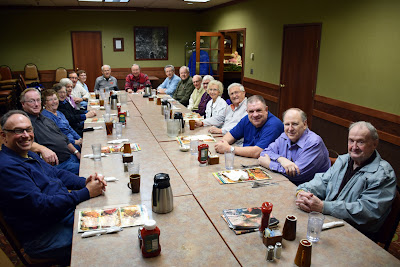 Well-attended reception in celebration of Howard Campbell's 90th Birthday on April 5, 2017, in the food court at West Acres Shopping Center. Watch Kevin Wallevand's outstanding video coverage of the celebration by clicking here.  It appears Howard had a fantastic day and everybody had a great time!

Sadly, our colleague and friend, BOB ARONSON, passed away during 2018. You can still hear a clip from WDAY's "Jay Thomas Show" which features an interview with Bob regarding the Florida hurricane was going on at the time, 10-6-2016. Bob was reached at his Florida home in Jacksonville. He reports on what was happening as he and his family prepared for the hurricane and he banters with his grand niece, Kerstin Kealy, co-news-anchor on WDAY-TV. To hear the audio file of that interesting appearance by Bob, click here


For those of you not on Facebook, where the following post and photos below appeared after the May luncheon, I'll re-post that info here along with three photos:


Our WDAY-Z Alumni & Friends luncheon was held on May 17, 2016, at the Fryn' Pan Restaurant and our gang welcomed a couple of new friends to our fold. In the third photo below, on the left is Colburn Hvidston III, the now retired photo chief at the The Forum; then Conrad Rose, retired WDAY-TV videographer and photographer (a luncheon regular), and, on the right, the subject of numerous photos by those two shutter bugs: retired Fargo Municipal Judge Tom Davies. What a dynamic trio!

Colburn even contributed a door prize which was by former WDAY-TV newsman and KVRR-TV news director, Jim Shaw, shown in the first photo below (Jim currently writes a column for The Forum and appears on WDAY Radio Friday mornings at 11:00 AM with Sandy Buttweiler). The door prize was a pillow emblazoned with a photo from WDAY Radio's past: (L-R, front) Little Joe Samness, Harry Jennings (former Forum staffer) and in the back row: Warren "Dutchy" Gerrels, Don "Axel" Wardwell, Dorothy "Linda Lu" Fandich and Les "Esty" Estenson. A fun time was had by all. Come back soon, Colburn and Tom, and keep up your excellent record of attendance, Conrad!  (Click on each picture for a larger image). 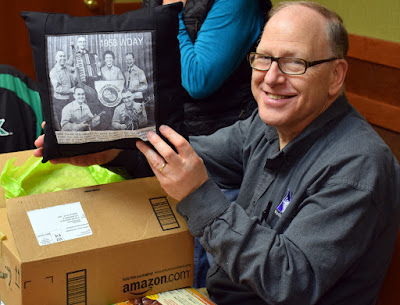 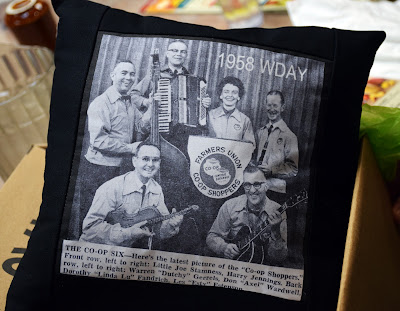 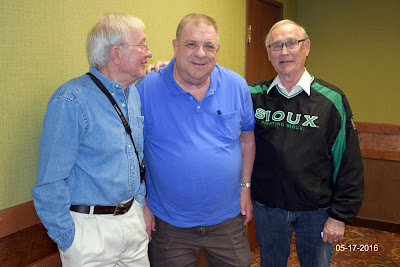 MORE PHOTOS from today's luncheon will be in the next WDAY-Z Mike Notes Reprise newsletter...possible in the August, 2016 issue. 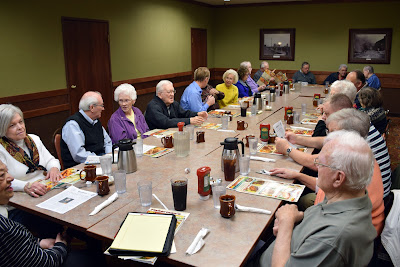 Below are two photos from our January luncheon, with 22 attendees! Great turnout. In Feburary, the Fryn' Pan moved us to a larger room that's worked out perfectly. Thanks to everyone who attended! Let's keep it up, gang!

Plan to attend! Maybe you're currently working for a WDAY-WDAZ-TV or WDAY Radio or you're a retired employee OR someone has moved on to another job OR you're involved in media, ad agency OR production work OR work for another media outlet in the region or state, whatever! Join us in sharing some memories each month. I worked at WDAY in the radio copy and commercial production area and did some TV voice-overs from 1967 until 1975.

Lunch is "dutch" - the gratuity is included on your check.  While there is no buffet, as such, there is a "soup and salad bar" that accompanies a sandwich order. Browse the Fryn' Pan's full menu by clicking here.

Note: Unlike our former venue, we must spend, as a group, at least $50 to have the room. So we need YOUR attendance!

I try to produce an occasional PDF newsletter called Mike Notes Reprise. ALL of our monthly newsletters I've produced so far are stored below. You can read them - using Adobe Acrobat Reader which is most likely on your computer - or after you OPEN an issue, note the little "down arrow" at the top of your screen. If you click on that arrow, you will download the document to your computer or other digital device. You'll also find a number of audio files and photo essays, below.