How the Coen Brothers made "FARGO" 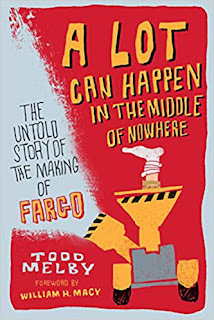 Todd Melby, blogger, public radio commentator and author from Minneapolis, Minnesota, has produced a book about the making of the movie Fargo, now another classic from Joel and Ethan Coen. And what a book it is! I'm a fan and student of how great movies are made and this book is absolutely one of the best I've read. The title is A Lot Can Happen in the Middle of Nowhere: the Untold Story of the Making of Fargo. It was published in 2021 by the Minnesota Historical Society Press, available both in soft car print and in the Kindle format.
I requested the book through our local public library here in Fargo, N. Dak. (in the "middle of nowhere?") and, after reading the printed book, I immediately purchased the Kindle edition through Amazon. I like having the Kindle book because I can highlight passages with my finger and these are immediately stored in my "notebook" on the Amazon website. I can then copy those passages and paste them into a Word document, handy when you're doing some writing and want to grab a quotation.
The detail that Melby goes through is meticulous and fascinating. He covers all of the players, the Coen's directing style, and the locations where things were shot. For example, I didn't realize that the scenes with William Macy who plays the frustrated car dealer Jerry Lundegaard, were all shot at the former Wally McCarthy Olds in Richfield, a Minneapolis suburb. General Motors pulled the plug on the Oldsmobile line(McCarthy Auto World now sells Buicks and other GM vehicles). That famous "woodchipper" scene was photographed at Square Lake, about 35 miles northeast of the Twin Cities.
You'll learn about Kristin Rudrud, who grew up the actual city of Fargo and still resides there, and her role as the wife of Jerry Lundegaard. Although her character gets killed in the picture, she plays a critical, albeit shortened, role. Kristin does the city of Fargo proud with her performance in this movie and during her appearances in local theater. She was perfect for the part of Jean Lundegaard. The Coen Brothers do know what they're doing in casting!
Ethan and Joel Coen know what they want from the actors. One of the filming situations I often quote is when Peter Stomare, the "big fella" culprit pal of "mousy" Steve Buscemi, the pair who kidnapped and killed Mrs. Lundegaard, is in their car heading into Minneapolis on I-35w. Ethan Coen is supervising production when Buscemi asks his buddy where he wants to eat. Stomare replies, "Pancake House." Ethan then stops the filming and asks Stomare what he said. "Pancake House," he replies. "No, it's not Pancake House it's Pancakes House." "Oh, I thought that plural was typo. "No," Ethan says, "we don't have typos in our scripts." Like I said, the Coens know exactly what they're looking for.
Fargo was nominated for several academy awards and Frances McDormand, who played Marge, the Brainard, Minn., female sheriff, won the award for Best Supporting Actress. Cost of production was $7 million and it earned an initial box office of over $60 million. It's still returning profits through DVD sales, Netflix, and via other distribution paths. Those who teach script writing, acting, cinematography and film editing use the Fargo script, direction, and casting as an outstanding example of how to make a move. The "collector's DVD" features a number of video interviews and production clips that are both interesting and fun to watch. I highly recommend this DVD as an ideal addition to any movie buff's collection.
By the way, the actual woodchipper that was used in the movie is now on display at the Fargo-Moorhead Visitor's and Convention Center. Stop by when you're in town! Ya, darn tootin'!
The author's website is www.toddmelby.com  - if you're looking to buy the book, and I recommend it, go to Amazon or stop by your local independent bookstore or the Barnes & Noble store in your community. - LG